Cricket Originals Blog: All the latest from the Original cricket t-shirt shop 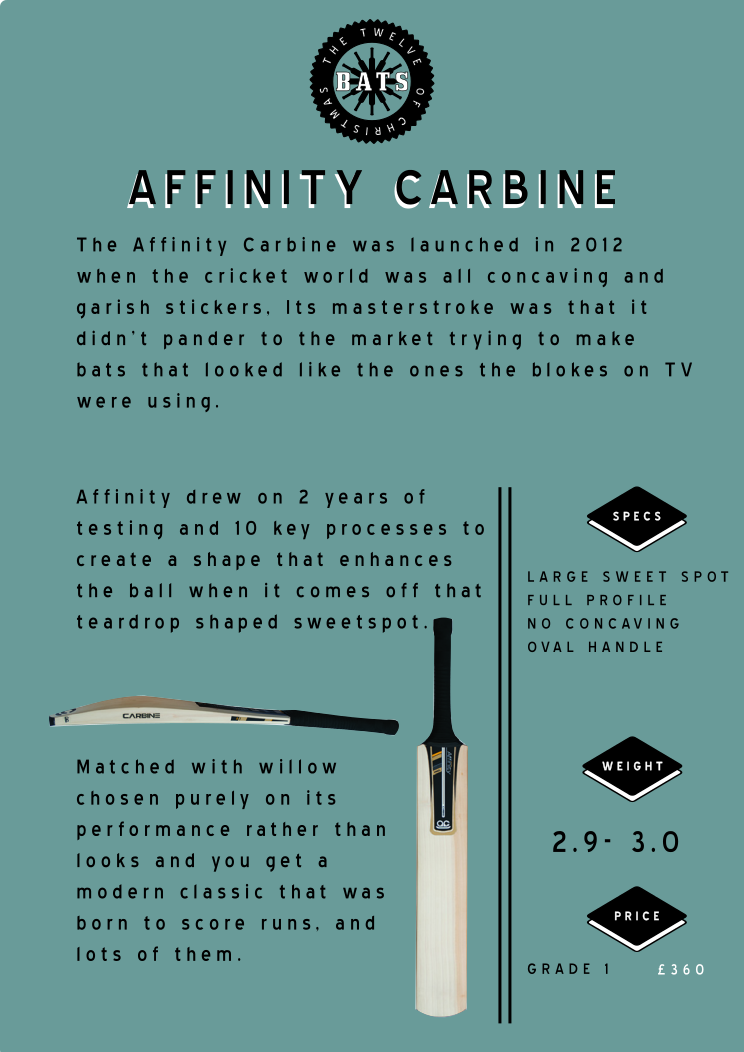 The 12 Bats of Christmas - Affinity Carbine

They say a Gentleman should only trust his taylor and his doctor. Well I think you can add in your Bat Maker as well, especially when the Bat Maker in question is Marcus Charman. He makes bats for real batters & isn’t interested in creating compromised shapes that look pretty.

In his own words, “I’m making a tool for someone to use to to the best of its ability. When you go out there it's you & your best mate against the bowler” So,when you choose one of his Affinity bats he will create your perfect best mate by looking at how you play. Maybe you need a handle increased in one part to help you keep the bat that bit straighter or some weight taken out or the handle set further forward to help your balance and play that bit later?

The Affinity Carbine was launched in 2012 when the cricket world was all concaving and garish stickers, so it seemed a bit strange that a small outfit from Oxford would create a full profiled minimal stickered bat to compete against them? This was Affinity’s masterstroke in that it didn’t pander to the market trying to make bats that looked like the ones the blokes on TV were using.

Instead Marcus drew on 2 years of testing and 10 key processes to enhance the ball when it comes off that teardrop shaped sweetspot. Matched with willow chosen purely on its performance rather than looks and you get a modern classic that was born to score runs, and lots of them. And if you need more reassurance then go to the All Out Cricket's gear reviews, there’s 27 of them so far, most of them 5 stars. Plus Marcus told me he’s spoken with over 80% of the customers during the process of their bat being made. A personal touch in an increasingly impersonal market. That’s how you find your best mate.